Night is Meant for the Sleeping 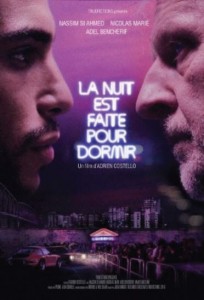 Short Synopsis:
Karim is a young Arabic boy living in the Parisian suburbs. He is studying law and he is working hard to succeed. He has two brothers, Nordine, the eldest, a charming gangster, whom he does not want to follow the example, and Ayoub, the youngest, whom he wants to protect. At a party, a shootout breaks out. Ayoub is killed. Karim and Nordine forced to flee for their survival. Karim falls face to face with his little brother’s murderer. The pain and the desire for revenge will undermine his principles and push him to fall into darkness. Arrested, Karim is interrogated by Captain Berthier, of the criminal police, which attempts find out the truth about that tragic night.