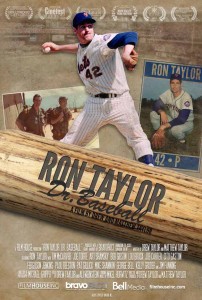 Short Synopsis: Ron Taylor: Dr. Baseball is the story of an 11-year major League pitcher, who after winning two world championships with the 1964 St. Louis Cardinals and the 1969 Miracle Mets, embarked on a USO tour through Vietnam that would change his life. After visiting field hospitals, Ron devoted the rest of his life to medicine, enrolling in Medical School at 35 and eventually becoming the team physician for the Toronto Blue Jays. Through interviews with former team mates and friends, his two sons uncover the course of their father’s life.

Celebrity Cast:
5 Members of the Baseball Hall of Fame (Cooperstown)

About Ron Taylor:
Ron Taylor was born in Toronto, Ontario, Canada in 1937. He was raised in the north end of Toronto, joining the Leaside Baseball Association at the age of eight. A talented right-handed pitcher he was signed to a minor league contract with the Cleveland Indians, but remained in school, completing a bachelors degree in Electrical Engineering before being called up to the major leagues. He played Major League baseball for parts of 11 seasons, winning two World Championships with the 1964 Cardinals and the 1969 New York Mets. He also played for the San Diego Padres, Cleveland Indians, Houston Astros, and Montreal Expos. In World Series play, Ron pitcher 7 innings without allowing a single hit. Today, the large Diamond at Leaside’s Talbot Park is named for Ron. After his career is returned to medical school and became the team physician for the Toronto Blue Jays, being part of the 1992 and 1993 World Championships. He has received multiple awards and inductions including, the Order of Ontario (O.Ont.), Canadian Baseball Hall of Fame, Canadian Sports Hall of Fame, Ontario Sports Legends Hall of Fame, Saskatchewan Baseball Hall of Fame, Leaside Sports Hall of Fame. For a complete biography, please visit:
http://www.baseball-reference.com/players/t/tayloro01.shtml
http://sabr.org/bioproj/person/6ba3415b